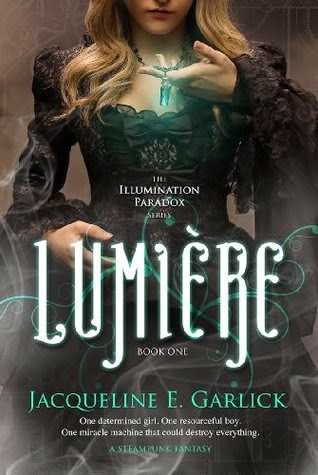 One determined girl.
One resourceful boy.
One miracle machine that could destroy everything…

After an unexplained flash shatters her world, seventeen-year-old Eyelet Elsworth sets out to find the Illuminator, her father’s prized invention. With it, she hopes to cure herself of her debilitating seizures before Professor Smrt—her father’s arch nemesis—discovers her secret and locks her away in an asylum.

Pursued by Smrt, Eyelet locates the Illuminator only to see it whisked away. She follows the thief into the world of the unknown, compelled not only by her quest but by the allure of the stranger—Urlick Babbit—who harbors secrets of his own.

Together, they endure deadly Vapours and criminal-infested woods in pursuit of the same goal, only to discover the miracle machine they hoped would solve their problems may in fact be their biggest problem of all.

When darkness is safer than light…

I do believe this is labeled as a "romantic steampunk".  This is the second book of this flavor that I have read in the last couple months.  I can't help but compare a bit as it's the same genre, but I really shouldn't because the two books were nothing alike.  The feel, the way they were written were completely different.

I will admit that it took me awhile to become invested in this book and it's characters.  The storyline is a good one though.  A magic machine, an evil madman, a girl searching for answers.  Eyelet is the underdog.  You can't help but root for her.  She is smart and curious and she is determined to find the truth.  I liked her no whine attitude.

If you think rooting for one underdog is good, you should try two.  Urlick is an underdog too.  Put Eyelet and Urlick together and you get, well, underdog squared.  ha!  They sort of have an annoying relationship at first that I didn't quite get, but after they started working together, I really enjoyed them both.  That's when the book turned around for me.  Up until then I just wasn't in.

There are all kinds of things against Eyelet and Urlick.  The before mentioned evil bad guy, deadly vapors, zombie like creatures in the woods and a couple other surprises thrown in for good measure.  The flying machine creature is good.  I really like it.

As far as content, there was frequent profanity and swearing.  There is an "almost" sex scene but it is interrupted so it never happens but they both verbally consent to it.  The almost sex scene was so out of place.  The two characters hadn't even shared anything as intimate as a real kiss.  They had a day of adventure but honestly, not much more than that.  The emotional connection was underdeveloped.  I felt there was a bit of a physical attraction but not much more than that.

I would say that overall this was a good concept.  The characters were good but my connection to them didn't run very deep.  The second half was definitely better than the first half.  I could have done without the profanity and swearing.

You can purchase Lumiere at Amazon.

I'm Jacqueline Garlick. Author of YA, New Adult, and Women's Fiction. I originally hail from the shores of Bournemouth England. No I don't, I'm just kidding, but my father's parents did! Actually, I hail from another familiar shore though. I grew up on the banks of the Thames River in Chatham, Ontario, not Chatham, England, but trust me it's just as murky. I love strong heroines, despise whiny sidekicks, and adore a good story about a triumphant underdog. (Doesn't everyone?) I love to read, write, paint (walls and paper) and plan cool writing events for cool writers (check out niagarawritersretreatandconference (dot) com.) I have a love/hate relationship with chocolate, grammar, and technology (doesn't everyone?) and would rather hang out with a dog, than a cat. I prefer creating things to cleaning things, and believe laughter is a one-stop-shop solution to all that ails you. It is also my position that ELO’s Mr. Blue Sky can improve on any bad day. You will always find a purple wall (or two) in my house (perhaps even a door) and a hidden passageway that leads to a mystery room. (Okay, so you won’t find a hidden passageway but a girl can dream, can’t she?) Oh, and tea. There will always be tea. I love specialty teas...and collecting special teacups from which to drink them (doesn't everyone?) (See website for collection.)

In my former life, I was a teacher (both grade school and college-don't ask), but more recently I've been a graduate of Ellen Hopkin’s Nevada Mentor Program and a student of James Scott Bell, Christopher Vogler and Don Maass. An excerpt from Lumière earned me the 2012 Don Maass Break Out Novel Intensive Scholarship.

Because of my edgy, rule-breaking, Tim Burton-esque style of writing (yes I did just start a sentence with 'because'...it's legal now, get over it) I am often referred to as the Quentin Tarantino of YA among writing friends (in particular my agent.)

Lumière—A Romantic Steampunk Fantasy—is my debut novel, Book One in my young adult The Illumination Paradox Series. I am represented by Josh Adams of Adams Literary.