Swept Up by the Sea by Tracy and Laura Hickman 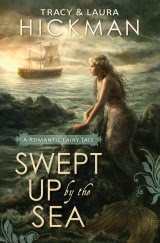 Determined to seek his fortune, Percival Taylor leaves behind his sleepy hometown and sets out to become a legendary pirate—only no one at the roguish seaport of Blackshore will allow him anywhere near a ship!

Percival must find other means to win the heart of the beautiful Tuppence Magrathia-Paddock, who has mistaken him for a pirate rogue out of one of her romantic tales. She is entirely willing to swoon into his arms if he can prove his buccaneer soul—and she is willing to arrange her own kidnapping to prove it.

Percival eventually finds himself captain of a broken-down ship, complete with a crew of pirates who make their living selling fake treasure maps, a jilted fiancee, a reclusive Master Shipwright, and an old professor with a secret that could kill them all. It’s Pirates of Penzance meets Princess Bride as this motley group of characters sets sail for treasure and romance.

Swept Up by the Sea is a tale full of different characters each trying to accomplish their own goals, coming together by happenstance and needing each other to see things through to the end.

It really took me awhile to get into this book.  At first I didn't think I would make it.  There was nothing compelling, pushing me to want more.  I'm glad I stuck with it though because probably a little better than a third of the way through I finally became interested and wanted to read more.  It just took awhile to get there.

I would call this a book for all ages.  It is innocent enough to be read aloud to younger children and will certainly entertain the younger set in the YA age range.  There is a lot of silly humor and Percival is about as naive as they come.  The book description compares this story to Princess Bride.  Having just watched that movie again recently, I would say not so much.  That's sort of a big claim to live up to.  But, this was a good story.

What I enjoyed more than anything were the stories within the story.  The shipwright and the professor's back stories were my favorite parts of the book.  It's what pulled me into the book, I think.

I enjoyed the end of the story- it had a satisfying ending for all.  And, as I mentioned before, it is clean.  I'm a girl that really appreciates a good, clean read.  This is a book I will hand over to my daughter.  She loves fantasy and romance.

My thanks to Shadow Mountain for allowing me to read and review for them.  They are a great publisher turning out some fantastic books.  I'm happy to be a part of promoting them.

You can find Swept Up by the Sea at Amazon.  (linked)
Posted by Getting Your Read On at 4:00 AM