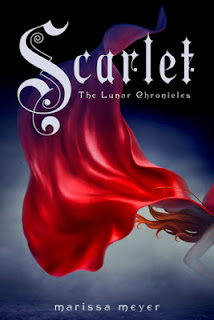 Cinder returns in the second thrilling installment of the New York Times-bestselling Lunar Chronicles. She’s trying to break out of prison—even though if she succeeds, she’ll be the Commonwealth’s most wanted fugitive.

Halfway around the world, Scarlet Benoit’s grandmother is missing. It turns out there are many things Scarlet doesn’t know about her grandmother and the grave danger she has lived in her whole life. When Scarlet encounters Wolf, a street fighter who may have information as to her grandmother’s whereabouts, she has no choice but to trust him, though he clearly has a few dark secrets of his own.

As Scarlet and Wolf work to unravel one mystery, they find another when they cross paths with Cinder. Together, they must stay one step ahead of the vicious Lunar Queen who will do anything to make Prince Kai her husband, her king, her prisoner.

I just finished reading this book and wow, I just love this series.  I can't believe how creative author Marissa Meyer is.  How does she think this stuff up?!

The play on old fairy tales is incredible.  First we have a cyborg Cinderella and now we have a little red riding hood with the whole wolf aspect that you won't believe.

The characters will draw you in.  The pacing of the book is forward moving at all times.  It just doesn't let up.  I loved that we didn't lose touch with Cinder and Kai and all the characters from book one.  We get alternating views from Cinder and Scarlet throughout the book, set on a course to intersect.  You won't believe all the crazy going down in this book.  CRAZY!  Crazy good.  :)

If you haven't read Cinder yet, you should.  This is a series that shouldn't be missed.

You can buy Scarlet everywhere but here is the link to Amazon.
Posted by Getting Your Read On at 7:44 AM