On Tour with The Ugly Stepsister Strikes Back + a giveaway 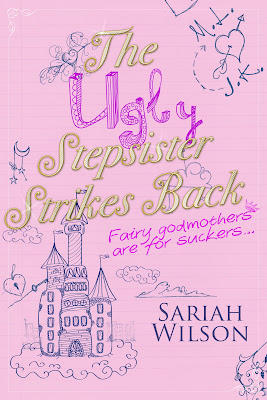 The Ugly Stepsister Strikes Back by Sariah Wilson

Everyone knows how all those fairy tales go. The princess gets beautiful, nabs her prince, falls instantly in love, lives happily ever after and leaves her evil stepsisters in the dust.

But what happens when you’re the ugly stepsister and your obnoxiously perfect—read pretty, smart, and, worst of all, sickeningly nice—stepsister is dating the charming, tall, devastatingly handsome guy you’ve had a thing for since you were nine years old?

Quirky, artistic and snarky Mattie Lowe does not lead a charmed life. Her mother is constantly belittling her on Skype. Mercedes, the school mean girl, has made it her personal mission to torment Mattie. But worst of all? Her stepsister Ella is the most beautiful, popular girl in school and is dating Mattie’s secret longtime crush, Jake Kingston.

Tired of being left out and done with waiting for her own stupid fairy godmother to show up, Mattie decides to change her life. She’ll start by running for senior class president against wildly popular Jake.

Ella can keep her Prince Annoying. Mattie’s going to rule the school.

And no one, not even a cute and suddenly flirty Jake, is going to stop her.

Love.  I'm pretty sure you are going to read that word one too many times in this review but it just cannot be helped.  This book was so cute and I just loved it.

Here's the thing.  I have a teenage daughter that loves to read.  She especially loves romantic teenage books but it is so hard to find those kind of books that are clean (no swearing, no sex).  I practically become giddy when I find a book like The Ugly Stepsister Strikes Back.  It is full of all things teenager- school drama, boy crazy drama, imperfect family relations and self doubt.  (Did I totally just sum up a teenager's world?!)  That was this book.  It not only deals with the problem side of these things, it deals with the overcoming as well.  That's where my love comes in.

Mattie is a normal teenage girl that we can all relate to.  She has spent her life comparing herself to her step sister.  The mean girl at school picks on her and her own mother belittles her.  No wonder the girl struggles.  I think we can all relate to having a crush in high school.  Ah, the unrequited love.  But what if your sister was dating said crush?  Ouch.  What I love about Mattie is that she keeps plugging along.  She doesn't set out to change the world right off the bat but she does come to the realization that she can be herself and she can do things that are great.  Once her thoughts change, her actions change and she begins to feel better about herself.  She realizes what a great friend she has in her sister and life becomes better for her.  I loved seeing that transformation.  It's what this mother wishes for her daughter.  :)

This really is such a cute book.  It's a fast, breezy, easy book to read.  It made me smile and it had the happily ever after ending that every romantic heart loves.  My daughter is going to love this book.

Sariah Wilson has never jumped out of an airplane, never climbed Mt. Everest, and is not a former CIA operative. She has, however, been madly, passionately in love with her soulmate and is a fervent believer in happily ever afters—which is why she writes romance. The Ugly Stepsister Strikes Back is her fourth happily ever after novel. She grew up in southern California, graduated from Brigham Young University (go Cougars!) with a semi-useless degree in history, and is the oldest of nine (yes, nine) children. She currently lives with the aforementioned soulmate and their four children in Utah, along with three tiger barb fish, a cat named Tiger, and a recently departed hamster that is buried in the backyard (and has nothing at all to do with tigers).