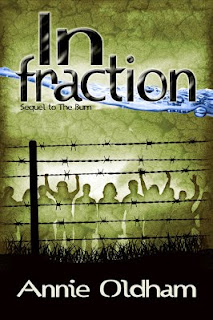 YA Dystopian
Title: Infraction (Sequel to The Burn)
Author: Annie Oldham
Date Published: 11/1/12
Violent nomads. The coming winter. Jack's unspoken feelings. Leaving the relative peace of the settlement is more difficult than Terra ever imagined. But what she should fear most is the government that professes to protect its citizens. Imprisoned in a labor camp, Terra learns just how much the corrupt regime wants absolute control. Never has she felt more powerless to act. But there's always the call of the ocean, and her captors just might underestimate how powerful that call can be.

I'm so excited to be a part of this blog tour for Infraction.  I've been wanting to read this series, which starts with The Burn, for awhile.  Luckily for this tour I got to read BOTH The Burn and Infraction.  Awesome!

The Dystopian genre is big right now.  I've read quite a few books in this category and this one is one of my favorites.

The main character, Terra, is one courageous chick.  When she lost her ability to speak, I was worried that the book would suffer.  How does a girl that cannot speak communicate effectively with others push a book plot along?  Especially a dystopian book which are usually known for their action and uprising.  Somehow Annie Oldham does it though.  You'll be surprised.  Terra has heart.  That is what draws the reader in and that is what connects her to the other characters in this book.

Like any great dystopian, the government corruption is believable and scary.  You know it could be real someday.  That's the freaky good thing about dystopians.  The idea in this book about the methods of control are good.  Yikers!

There are great supporting characters in this book as well as two worlds, one on land and one under the ocean, brought together.  I really like the ocean colonies and I'm excited to see how those two worlds mesh together in the next book.  I'm anxious to know where this story is going.  I know there is more to this- an even bigger picture that I haven't gotten yet.  Infraction sure ended abruptly.  I thought for a minute that I was missing part of the book, but no.  It just ended that abruptly.  I guess I was just ready for the book to go on and on.  :)

Here is an excerpt from Infraction:
We burrow down in the hollow and scrape the bracken around us. I pile the leaves down against our legs and shiver as the dampness seeps into my pants. I'm pressed up against Jack, and his arm wraps around me protectively, before he can even stop to question—like he has on so many other nights—if I'd even want him to. There's no time for thinking, and when there's no time to over think this, I realize I never want him to move his arm. But I can't follow that train of thought through to its conclusion because I hear footsteps coming toward us.


I reach my hand up to Jack's arm and squeeze it so tightly I'm sure he'll gasp, but he's silent and still as a tomb. I'm trembling, and even Jack's arms around me can't stop it. Nomads were one thing. They might kill us, but it would be quick. But agents? They would torture us to find out where we've been, how many other illegals we've come across, and what unauthorized settlements we've seen. They would probably kill us eventually, and there would be nothing quick about it. I look down and see the small thread of a tracker scar on Jack's arm next to the unblemished flesh on my own. Very few people have never had a tracker. What would the agents think of me, and what would they do about it? 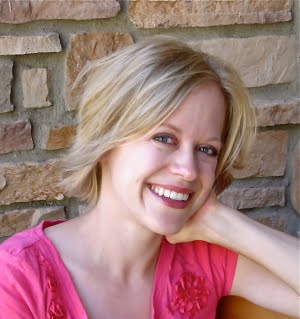 Annie Oldham adores writing and reading YA novels. She grew up in a house full of books and developed an insatiable desire to read, which led to the insatiable desire to write. Away from her writing, she's the mother of the three most adorable girls in the world, has the best husband in the world, and lives in the hottest place in the world (not really, but Phoenix sure feels like it). She loves to cook, sing, and play the piano. She is the author of Infraction, The Burn, Bound, and Dragon Sister.
CONTACT
Website
Twitter: @annie_oldham
Facebook