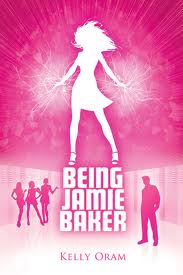 An accident that should end in tragedy instead gives seventeen-year-old Jamie Baker a slew of uncontrollable superhuman abilities. To keep her secret safe Jamie socially exiles herself, earning the title of Rocklin High's resident ice queen. But during a supercharged encounter with star quarterback Ryan Miller she literally kisses anonymity goodbye. Now the annoyingly irresistible Ryan will stop at nothing to melt the heart of the ice queen and find out what makes her so special. Unfortunately, Ryan is not the only person on to her secret. Will Jamie learn to contain her unstable powers before being discovered by the media or turned into a government lab rat? More importantly, can she throw Ryan Miller off her trail before falling in love with him?

Zap!  Powey! (yes, I totally know Powey isn't a word but it sounds so good.  Especially after zap.)  Why haven't I read this book before now?  Where have I been?  Evidently I've been hiding under a rock or deep inside a cave. . .

I'm feeling the love for this book.  I'm having all sorts of fantasies of having a supercharged, shocking power.  What, children?  You don't want to clean your room?  ZAP.  (giggle, giggle)

Man, Jaime is the queen of teen angst.  Yeah, she sure had a lot of reasons but I was seriously wishing she would just give poor Ryan a break.  That poor guy.  Jamie's journey back to the land of the feeling was enjoyable though.  I was really rooting for her.

Ryan love?  Um, yes.  What a perfectly confident, determined, happy guy.  Lucky for Jamie because that girl seriously needed a friend.  You can read a short story called Kissing Jamie Baker on Kelly Oram's website by clicking HERE.  It's awesome.

Oh, and the book trailer.  Which is one of my favorites.

I had such a good time reading this book.  I literally just blew through it and at the end I sat there wishing it weren't over.  I'm looking forward to reading more from Kelly Oram.  I hear she has a new book coming out soon.  Yipee for us!
Posted by Getting Your Read On at 8:43 AM