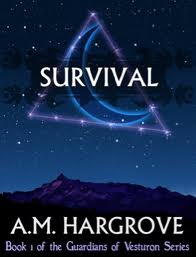 "Maybe I was caught between the two worlds. I was having serious trouble distinguishing fantasy from reality."

While on a backpacking trip in the Great Smoky Mountain National Park, nineteen-year-old Maddie Pearce finds her world has been thrown into a vortex and is madly spinning toward the impossible. Abducted by a mad psychopath, Maddie narrowly escapes with her life. But that is only the beginning. Her mysterious rescuer introduces her to a world that Maddie has difficulty accepting as reality. Will this strikingly gorgeous stranger be the key to her future or will she return to her mundane world, scarred from her experience? Follow Maddie as she is forced to make difficult decisions that carry her to mysterious places.
I recently signed on to be a part of a blog tour for the third book in this series and while it said it could be a stand alone book, I really wanted to check out these other books before I read the third book.  I'm really glad I did.
First off, let me say that Survival is FREE on Amazon as an ebook for download.  Check it out here.  (it is also available for most other e-readers.  You can find the links by clicking HERE.  This will take you to the author's website.)  I was super happy about that!  As soon as I finished it, I ran right back to Amazon to download the next book.
It took me a little while to decide I liked this book.  I'm not sure why exactly but by the end I was fully invested and I wanted more.  Thank goodness I didn't have to wait a year for the next book!  I will say that this book was kind of odd in that it jumped from first to third person.  When it started it was first person and I have a harder time with first person POV. That may be why it took me awhile to get into it.  I will also say that it had some very similar ideas to Twilight.  I know, I know.  Comparing is sometimes mean.  This book wasn't Twilight, but it had some very similar themes.  You know, girl who thinks she is too ordinary, hot guy with all kinds of great extraordinary abilities (mind reading, strong, fast. . .), said hot guy has a hot family too.  He is smart and rich but being with said "ordinary" girl will put himself and his family in jeopardy but he is determined to do it anyway.  See what I mean?  I will say that the MC's of this book didn't really sound or feel like the characters in Twilight though.  The overall feel was different but I can't deny the similarities.
So, on to the next book, Resurrection.

"Maddie knew she was dying. Her life started to flash before her. She had visions of running down the soccer field, scoring a goal, eating her mother’s yummy, homemade, sticky cinnamon rolls, standing in her foyer listening to the police tell her father that her mother had been killed in a car accident. Each vision was disturbingly clear—as if it was happening again."

Rayn Yarrister, the first-born son and Leader of The Guardians, has been imprisoned on Vesturon for breaking their most sacred of covenants. He is suddenly jolted by Maddie's telepathic pleas for help, as her life hangs in the balance. Can he alert The Guardians in time to save his soulmate? Or will he face his trial alone and broken without his one true love?
In Resurrection (Book 2), The Guardians of Vesturon are facing their biggest challenges as Earth is threatened by an invading species from a distant planet intent on destroying it for its resources. The Guardians, as protectors of the universe, have been assembled to defend not only Earth, but other vulnerable worlds as well. The Yarrister family is threatened by an unknown entity intent on discrediting them. Will they uncover this plot in time to save themselves from ruin? Will The Guardians succeed in stopping the Xanthians, or will Earth be invaded and ravaged by this marauding species?
I actually liked this book better than book one.  I think both books have excellent pacing.  I wasn't bored or skimming to hurry things along.
I was glad to change scenery and be on a new planet in space.  Maddie really drove me nuts in this book though.  I wanted to throttle her.  It's hard to say too much because I don't want to give anything away.
As for content, there is mild swearing and some profanity.  There are some more graphic scenes of violence.  There is talk between characters about having sex.  Book two does imply sex between a married couple but there is nothing descriptive.  The author recommends 15 and up for this series.  She says, "  This book is suitable for young adults, aged 15 and older. It is recommended that parents inspect and review what their children are reading. "  That is a statement that I can respect.
I'm looking forward to reading the next book in this series.  It picks up with one of the hottie brothers and follows him, I do believe.  Look for my review in July/August.
Oh, and one last thing.  There is a short story prequel, Beginnings, (also FREE). 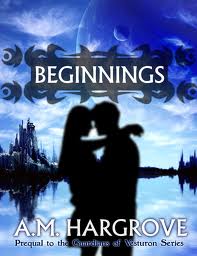 You can find links for that on the author website.  http://www.amhargrove.com/
Posted by Getting Your Read On at 8:26 AM