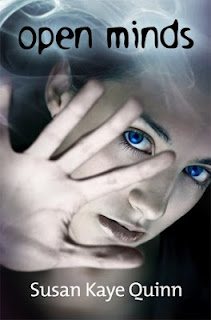 Sixteen-year-old Kira Moore is a zero, someone who can’t read thoughts or be read by others. Zeros are outcasts who can’t be trusted, leaving her no chance with Raf, a regular mindreader and the best friend she secretly loves. When she accidentally controls Raf’s mind and nearly kills him, Kira tries to hide her frightening new ability from her family and an increasingly suspicious Raf. But lies tangle around her, and she’s dragged deep into a hidden world of mindjackers, where having to mind control everyone she loves is just the beginning of the deadly choices before her.

First off, my thanks to Susan Quinn for finding me and asking me to review her book, Open Minds.  Second, my congratulations to Susan for a job well done.  :)

Open Minds was a fantastic book full of all the elements that I love in a good book.  The characters were well developed and I believed them.  I felt invested in their feelings and choices.  I cared what happened to them.  (I think I still do.)

There was just enough suspense and action to keep my complete attention.  My heart would start to pump a bit faster and my eyes would start reading faster in an attempt to find out what happened.  I liked that.  But suspense and action were not the whole book, which is why I really liked it.  It had those down times where we were able to connect and feel.

Here is a quote that made me smile because I remember learning about sludge in my Natural Resources and Conservation class in college.  My friends and I would joke around about something being sludge because that was the worst it could get.  "There must be something worse than green sludge on cheese, because I had sunk to a new low."


As far as content goes, this was happily free of swearing and sex.  There were some kissing scenes and some sexual references.  There was some underage drinking and some violence.

I really, really liked this book.  You all should check this book out.  I'm eagerly awaiting the second book, Closed Hearts, which is the next book in this trilogy and hopefully it will be out soon.   You can find out more about these books at The Mindjack Trilogy website.

You can purchase Open Minds (ebook) for 2.99 on Amazon.  Or as a paperback book for under 10 dollars.  You can also find it at Barnes and Noble. 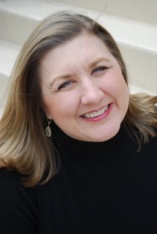 Susan Kaye Quinn grew up in California, where she wrote snippets of stories and passed them to her friends during class. She pursued a bunch of engineering degrees and worked a lot of geeky jobs, including turns at GE Aircraft Engines, NASA, and NCAR. Now that she writes novels, her business card says "Author and Rocket Scientist" and she doesn't have to sneak her notes anymore. All that engineering comes in handy when dreaming up paranormal powers in future worlds or mixing science with fantasy to conjure slightly plausible inventions. Susan writes from the Chicago suburbs with her three boys, two cats, and one husband. Which, it turns out, is exactly as much as she can handle.
Posted by Getting Your Read On at 9:24 AM