Review + Giveaway: Beyond by T.P. Boje 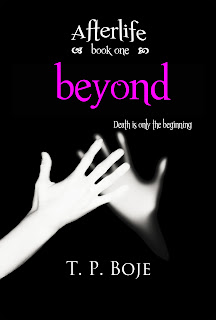 (from the author) Have you ever wondered where you go when you die?
Meghan is 16 when it happens to her. She wakes up on a flying steamboat on her way to a school run by Angels in a white marble castle. She meets Mick who helps her through a difficult time in a different world filled with heavenly magic. One day she finds a mirror in the cellar of the school and goes through it. She ends up back on earth where she meets Jason. But Jason is in danger and Meghan knows something important.  Soon she will have to choose between the two worlds.  The one she belongs to now, and the one she left.
Beyond is a Y/A paranormal romance and the first book in T. P. Boje’s Afterlife-series.
Picking up books by self-published authors can sometimes be a mixed bag.  I love that it is easier for authors to get some exposure and I love having a chance to read some great books that I otherwise wouldn't have been able to read.  There are some incredibly talented people out there writing.  T.P. Boje is definitely one of those talented people.
The mixed bag comes in where I run into editing problems mostly.  Generally speaking, self published authors haven't usually had professional edits done and that sometimes leaves me,  the reader, a bit frustrated and confused.  (I'm not saying this is always true, but I've run into this several times in my reviewing.)
So, with this book, I have a sort of mixed bag review.  As for the story itself, it was good.  I liked the ideas presented and the way the information unfolded to me.  I felt like I was pretty much in Meghan's shoes, learning everything when she did.  There were some great moments in the book.  One of my favorite ideas was the flying.  I used to have flying dreams all the time was I was younger.  There were some scenes in the book that totally reminded me of those dreams.
I enjoyed Meghan's sense of compassion and her kindness to others.  She is a character you cannot help but like.  She is a fabulous friend.  I'm curious to find out what happens with Jason in the next book.  The ending of Beyond left Jason in a sad place and I'm really hoping for something great for him in the next book.
My biggest complaints are with the editing here.  I am not an editor nor am I an English major, but the frequent editing issues in this book were obvious even to me.  Sentence structures were odd, past and present verbs were used together in the same sentences, and there were quite a few typos. It was hard for me, as a reader, to get past those things.  There were a few places that I went, "what?!"  Things just didn't make any sense.  Meghan is a ghost and she learns she can float instead of walk.  She says in the book that once she learned to float, she never walked again.  But, then she sneaks out and tiptoes down the hall.  Do you need to tiptoe when you float?  The image in my mind just didn't jive.  Also, at another part, all of the new people sit at a table for dinner together.  Earlier, we were given exact numbers of how many people were included.  It was about 84 people total.  They all sat at the same round table together.  Wow, 84 people around one table.  That is a massive round table.  Can you picture that?
I think Beyond is a good YA paranormal story and has a lot of potential.  T.P Boje has a talented and creative mind.  I admire her dedication to writing. I wish her much success with her books and her writing future.


Therese has generously offered one ebook (INT/US) and one paperback copy (US) of her book for a giveaway.  That's two winners!  To enter, just leave a comment with a way to contact you if you win.  Let me know if you are INT or USA.  Giveaway will end 1/31/2012.

Here is a bit about T.P. Boje:  T. P. Boje is a mother of two, a stepmother of another two and a hardcore cartoon lover, Tim Burton enthusiast, and enjoys any movie the Coen Brothers have made (with the big Lebowski being her favorite strongly followed by Burn after Reading). She is also a writer of Y/A Paranormal Romance, fantasy and mystery. She is originally from but currently living in , . Her books are translated into several languages.


To learn more follow her on Twitter @TPBoje, visit her fansite on Facebook or check out her web-page: http://www.tpboje.blogspot.com
Posted by Getting Your Read On at 4:00 AM