Review: Across Eternity by Aris Whittier 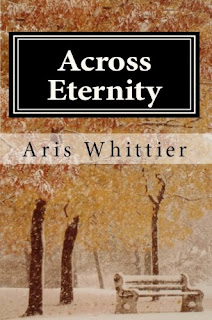 From Goodreads:
Born a genius; education, wealth, and prestige came easy to Logan Richards. Actually, there wasn’t much that Logan couldn’t learn or acquire. However, he knew there was more to life than money and power. Logan was determined to find the woman who he'd dreamed of his entire life and know what it was like to love her before he died.

Amber Lewis, a waitress for a five-star restaurant in, Dana Point, California, was overworked, stressed, and wary of life since her sister, Heather, had passed away. Then, one evening while working she fell hopelessly in love with Logan Richards, a chivalrous man who felt deeply familiar.

For Amber, it was the beginning of a voyage of self-discovery and renewal. For Logan, it was the completion of life. For each of them it was the deepest sort of love.


I enjoyed many things about this book. First, I liked the unwavering devotion of Logan. He was a man of strength and determination as well as patience. His persistence in finding his love was touching. While I, myself, do not believe in reincarnation, I do believe that we existed before this earth and that we continue on after this life. I really do believe that love can last an eternity and you are lucky if you can find and make a life of love and devotion with someone that will be fulfilling throughout eternity.

Second, I was very touched by the real emotions towards the end of the book. I cried, and that is saying something because I tend to be pretty good at keeping those emotions in check. It takes a fair amount of talent to bring real and raw emotions across in a book.

I guess I could relate better to Amber as she is a bit confused through most of the book. Because she doesn't have access to the inside track of memories from her lives before with Logan, she feels frustration and sometimes anger. I liked how Amber learned more about herself with Logan. He taught her to have courage and believe in herself. He taught her to live life fully. Of course, it didn't hurt that Logan was filthy rich and could give her anything she wanted.

I sort of wished that because the story was built on reincarnation that we could have had more story before or after the life we were watching. The focus was just on the right now life and I guess I just wish I could have seen more of them together and satisfied in previous or next lives. Gee, I hope that made sense.
This book did have sex and it wasn't behind closed doors. That's not to say it was crass or overly detailed, but it crossed a line that I, personally, have set for myself. It also contained swearing.

My thanks to Aris for sending me her book to read. I wish her the best with her writing efforts as she has much talent to offer the world. :)

You can pick this book up for the Kindle on Amazon for $2.99 here.
You can find out more about Aris Whittier and her books here.

Posted by Getting Your Read On at 4:41 PM