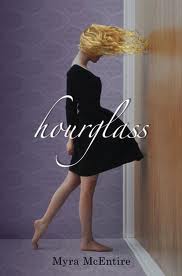 Emerson knows she is different.   Not everyone can see ghosts from the past and make them pop by punching them.  It’s freaky.  After losing her parents in a crash, Emerson’s life turns inside out.  She is hospitalized for ghostly claims and becomes so depressed she can hardly see the way out.  But within Emerson lies an inner strength to fight against the darkness and make her way back to the light, and her brother, the only family she has left.
Thomas loves his sister and wants to protect and help her.  Michael is his newest attempt.  Michael works for secret organization called Hourglass, a place devoted to helping people understand their unusual “gifts”.  Emerson decides that talking to Michael might be a good idea because her ghostly sightings are increasing and she doesn’t know how to handle it.
Michael seems to be the perfect person for Emerson to relate to.  He can also see ghosts and believes everything she tells him.  It doesn’t hurt that he’s also drop dead gorgeous.  The electricity between Michael and Emerson is literally palpable.  Emerson doesn’t understand the crazy connection the two of them share but she knows that Michael is someone she wants to trust and love.
Emerson begins to learn of a new world and a new way of life with Michael; a place where she feels normal and relaxed.  People with unusual gifts have a tendency to attract the wrong kind of people though, people who would exploit those gifts for power and money.  Emerson finds herself thrown into a complex problem that requires traveling to prevent a death that never should have happened.  It’s risky, even deadly.  The consequences of failure could change Emerson’s past as well as her future.
Hourglass is a well written, engaging story combining the paranormal world with time travel.  The pages just flew by.  I loved the connection between Michael, Emerson and Kaleb.  There were so many yummy, tension filled moments.  MichaeI is the classic good guy, putting aside his desires for the greater good.  His classic good looks along with his hero saving role makes for a character easy to drool over.  Kaleb, on the other hand, has the bad boy cover that you just know is really just a good guy, broken and waiting for the right girl to come along and make him whole.  It’s hard for a girl to ignore those kinds of guys.
I also really enjoyed the relationship between Emerson and her brother.  I appreciated the way he trusted her and believed what she told him.  He was a guardian as well as a supporter.  He was the true feeling of family to me.
The whole concept of time travel always makes my head whirl.  Somewhere in Time has always been a favorite movie of mine, but I just can’t think about it too much.  Or how about the TV show Dr. Who?  Head whirling!  It will be so interesting to see how this story plays out.  I just know there is some fun time traveling twists to come!
The book ended way too soon for me and definitely left the door wide open for a sequel.   Ooh, and I love the cover!
The only real drawback for me was the swearing.  Man, it was all over and I wished the whole time that it wasn’t there.  It was just full of mild obscenities, so much that I had a hard time reading it.  In my own perfect world, I would take out the swearing and have a perfect book.
Posted by Getting Your Read On at 4:12 PM