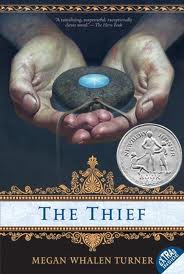 The story of Gen begins in a prison where Gen is being held for stealing.  He is not just a thief, but a bragging thief.  Self proclaimed as the best thief, able to steal anything.  The king’s scholar, the magus, needs Gens help as a thief to steal a rumored and hidden treasure of the God’s from another land.  We follow their journey to the hidden temple of the Gods where Gens abilities are put to the test.  The magus has plans, but Gen is a trickster and has a plan of his own.
I didn't get really into this book until Gen reaches the temple of the Gods and begins his adventure there.  From the beginning I guess I felt a bit indignant on behalf of Gen and the cruel treatment he received.  I mean, I know he was a thief and all, but still.  I did love the ending of this book because it went someplace I wasn’t expecting.  It unfolded into another story.
I read and reviewed this book for another website before I started blogging.  I've actually read the whole Thief series and loved it.  I recently won this book through a giveaway (thank you, Lindsey @ http://lindsaycummingsblog.blogspot.com/) and had the chance to remember my love.  It's so lovely to own a copy and share it with the people around me.
The moment I really bonded with Gen was when he said this in response to Sophos’s question, “If you could be anywhere you wanted right now, where would it be?”  “In bed.  In a big bed, with a carved footboard, in a warm room with a lot of windows.  And sheets.  And a fireplace, and books.  Lots of books.”  That was the moment that I knew I could love Gen.
Posted by Getting Your Read On at 5:15 PM