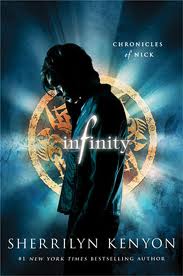 Sarcastic, quick-witted Nick Gautier thinks he knows pretty much everything about the world going on around him.  At fourteen, he’s had his share of hard knocks.  With his dad in prison, his mother working as an exotic dancer and barely bringing in enough money to feed them, Nick knows plenty about being poor and doing without.  At school he is constantly bullied by kids who think they are better than him because they have money and status.  Nick knows how to be tough.  Then weird things start happening, like one of the kids at school tries to eat another kid.  The world Nick thinks he knows is only the surface of what is really out there.  As he quickly learns, looks can be deceiving and things are not always what they seem.
There are a few things I liked in this book.  I enjoyed the dry sarcasm Nick had.  It was quirky and often funny.  I liked the idea of paying forward the kindnesses you receive, especially if you are in a position to help others.  I could relate to a mother who loved her son and wanted better for him that what she got dealt in life.


Past that, for me, this was a read I endured.  I’m not a fan of zombie books so it didn’t have much appeal to me.  I felt like for most of the book that I was missing out on something.  This series is a prequel to Kenyon’s adult Dark Hunter series, which I haven’t read.  I’m pretty sure that’s why I always felt like I didn’t really know some things that were going on that I should have.


As for content, there is language and while there is no explicit sex, there are plenty of sexual references.  I actually read this book per request for the website The Literate Mother where we review books for content for those that want to know.  If you are interested in the breakdown on content you can view it here.
Posted by Getting Your Read On at 9:48 AM