Together With You by Victoria Bylin 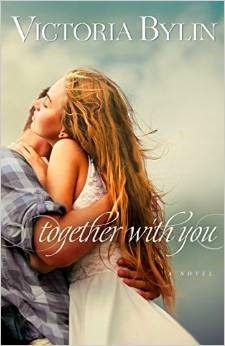 When a Lost Child warning blasts over the mall's PA system, toy store manager Carly Mason finds the little girl playing with a stuffed rabbit. Something about five-year-old Penny Tremaine is different. An ex-social worker, Carly recognizes that Penny suffers fetal alcohol effects, and a piece of Carly's own past suddenly confronts her. Never again will Carly become involved with a client. The risks are far too great. But something about Penny--and Penny's handsome father--tugs at Carly's heart. Before she has time to think it through, she agrees to a much-needed job as a nanny.


Dr. Ryan Tremaine knows he messed up his life. But this summer he will redeem himself. With his ex-wife remarried and on a trip far away, his two teenage sons and Penny are living under his roof full time. Ryan is dedicated to his sink-or-swim list, a plan to reconnect with his children. The first step: recruiting Carly Mason to be Penny's nanny.


Ryan never anticipated being so drawn to Carly, an attraction Carly seems to fight as much as he does. Could Carly be the missing piece that helps his family stay afloat, or will their blossoming romance only complicate things further?

When I saw this title on NetGalley, I knew I wanted to read it.  I'll admit that the cover attracted me too.  :)

This is a meaty sort of book.  Yes, it has a developing romance but nothing is really acted upon until the end of the book.  Ryan and Carly are attracted to each other from the beginning but there are some major issues that separate them.

Ryan and Carly are really opposites as to where they are in life.  Ryan is a bit older than Carly with teenage sons from a first marriage, and a daughter from an affair he had.  He is trying to make up for his mistakes and be a good father to his children but he is in a bit over his head.  His daughter suffers from FAE (fetal alcohol effects) and needs extra special care and attention.  It's a lot for one single dad to handle.  Ryan needs Carly so badly.

I loved Carly.  She is smart and capable but very soft and human too.  She loves with her whole heart.  She was easy to connect with.

Like I said, this book has some meat to it.  Real life complications are everywhere in this book.  The author does a great job of balancing things so the book doesn't ever feel too heavy.  This is also a Christian fiction book so there is talk about God.

I really liked this book.  I read through it quickly and became invested early on.  I'll be looking for more books by this author!

My thanks to Bethany House Publishers for allowing me to read and review titles for them via NetGalley.

Labels: Christian Fiction, Clean Romance, Together With You, Victoria Bylin