Less Than Nothing by R.E. Blake 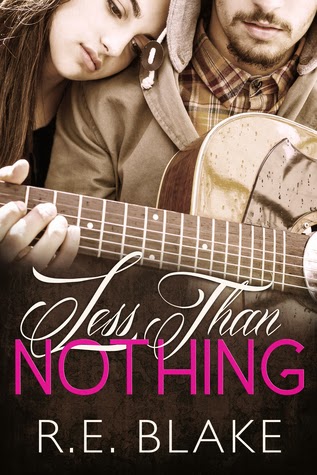 Sage’s life as a teenage runaway in San Francisco is simple: Snatch a few hours of sleep on park benches and bus stops; dodge perverts, predators, and cops; and make enough as a street musician to eat. But her world flips upside down when she meets Derek – hot, tattooed, and charming, a singer from Seattle whose looks and talent take her breath away.

What begins as a reluctant partnership quickly develops into a cross-country race against time - and awakens a hunger in Sage that’s unfamiliar and exciting.

As they travel from coast to coast, Sage and Derek pursue their dream, only to discover that they can never run far enough to escape the demons from their pasts.

The first thing that drew my attention to this book was the musical aspect and the across country travel.  After reading the book, I'd have to say that those two things remain the most appealing.  It was easy to imagine Sage and Derek on the streets of SF, singing and it was easy to imagine them in New York doing the same thing on stage.  The whole road tripping with the truckers was fun.

The backstory for Sage and Derek unravels slowly and gently, bit by bit.  Sometimes I don't love that approach, but for this book it worked.  It gave some good insights on the homeless and circumstances that may have brought them there.  Especially for teenagers.  It kind of breaks my heart.

I felt like the romantic tension in the book fell a little bit flat.  I appreciate that there was no sex in the book but that isn't what I'm talking about.  It's that tension and build up.  Instead of increasing tension, there was a let down, especially in the last third of the book.  I just didn't believe Derek's reasoning for pulling away given his previous actions.

For me, there was too much swearing and profanity.  There was a lot of what I would term, "crass talk" and I'm just not a fan of that.  There is underage drinking and some violence including an attempted rape.

I picked this book up on NetGalley in exchange for a review.  My thanks to the publisher for allowing me to read and review for them.

You can find "Less Than Nothing" on Amazon.
Posted by Getting Your Read On at 4:00 AM

Labels: homeless, Music, YA, YA Contemporary