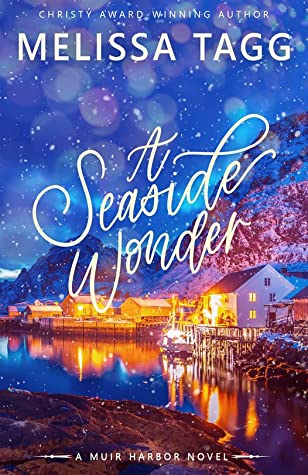 In one evening, Indi's world falls apart. Enter the shy professor her family mistakes for her fiancé...make that ex-fiancé.

Professor Philip West never wanted to return to Maine . . . or his grandfather’s miserable old house. But after his mother’s death, he’s now the guardian of a teenage half sister he barely knows—one who doesn’t want anything to do with him. He longs to help her heal, but he’s exhausted and numb, desperate for relief of his own. Maybe that’s why he’s so easily distracted when he happens upon the little shop with a name on its storefront window that sounds familiar, a hint of a mystery nudging him inside.

More than a decade has passed since Indi Muir made the heartbreaking decision she’s never recovered from—though she’s certainly tried. She has a full life running her shop and creating the artsy pieces that fill its shelves. If she can just stay busy, she’ll keep her hurt and regret at bay. But when her ex-fiancé returns to Muir Harbor, he brings news that shatters her carefully built walls. Things only get worse when lurking danger comes calling at her childhood home.

The one bright spot amid Indi’s turmoil is the shy stranger who wandered into her shop months ago and his moody but lovable sister. As she confronts her past and the mysterious threat facing her family, she’s intent on helping Philip win over his sister. He just might win over Indi, too, if they can overcome old secrets and wounds, outrun rising peril . . . and take a chance on love.

I've been so eager to return to this family in Muir Harbor, Maine.  The setting is idyllic and I so enjoyed the first story that I couldn't wait to have more.

Indy is in the spotlight for this story.  She's a character that you know has a LOT going on in her mind but she just doesn't let it out.  It's like a pressure cooker in there.  I loved the first meeting for Philip and Indy.  It was humiliating for both them for different reasons but was a bit amusing from a reader's standpoint.  I loved how Philip and Indy's relationship progressed and how steady and kind Philip was for Indy.  He said the sweetest things.  Both characters were easy to invest in emotionally.  I felt connected to their struggles and their successes.

There is a bit of mystery swirling around that started in the first book (which I highly recommend you read first, but I don't think you HAVE to) and progresses in this book.  It was a good added element that really leveled up the plot.  The ending really left me longing for the next book because man, things are really ramping up.  I loved family, this series and this book!