Turn to Me (A Misty River Romance #3) by Becky Wade 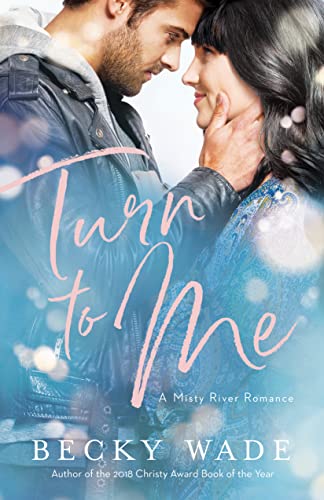 His promise will cost him far more than he imagined.Guilt has defined Luke Dempsey's life, but it was self-destructiveness that landed him in prison. When his friend and fellow inmate lay dying shortly before Luke's release, the older man revealed he left a string of clues for his daughter, Finley, that will lead her to the treasure he's hidden. Worried that she won't be the only one pursuing the treasure, he gains Luke's promise to protect her until the end of her search.

Spunky and idealistic, Finley Sutherland is the owner of an animal rescue center and a defender of lost causes. She accepts Luke's help on the treasure hunt while secretly planning to help him in return--by coaxing him to embrace the forgiveness he's long denied himself.

As they draw closer to the final clue, their reasons for resisting each other begin to crumble, and Luke realizes his promise will push him to the limit in more ways than one. He'll do his best to shield Finley from unseen threats, but who's going to shield him from losing his heart?

Ooh, I loved this book.  I'm pretty sure this is my favorite of the series but maybe that's because I've been waiting so long to get Luke's story?  The buildup was definitely worth it because this story had it all.  Romance, Mystery (who doesn't love a treasure hunt?!), Danger and Dogs!  😍

Luke is a tough nut.  He's been through a LOT and man, he's rough around the edges.  Finley is his exact opposite and also exactly who he needs to soften up those rough edges.  Finley is quite determined to rehabilitate Luke just like she does the dogs she rescues.  Luke can't run away because, well, he made a promise and funny thing, he really likes Finley.

I loved the slow build of friendship for Luke and Finley.  The growing intensity of feelings was spot on as both of them adjusted the way they viewed themselves and their lives.  Luke's protective nature was attractive and as the danger became clearer to me as a reader, I became so invested in every move, every detail that was happening with the characters.  It was one of those books that has lots of layers and lots of growth.  Mostly for Luke as he reconciles with his family, his friends, and himself.  I loved all of it.

Posted by Getting Your Read On at 7:34 AM