The Crown of Rosemund by Michele Ashman Bell 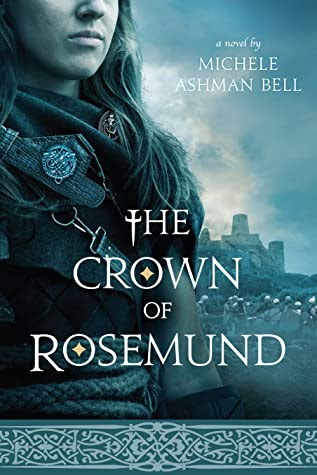 Anduron, 1498The king and queen are dead, murdered by one who will stop at nothing to rule. But the young princess—Rosemund—has survived, spirited deep into the forest by her parents’ most trusted advisor. There, she finds refuge in a small cottage and a new life, one in which she must play a role that will ensure her survival. Soldiers are combing the countryside searching for the lost princess, and they will not rest until she is found—and eliminated.

Rosemund’s strength grows as she trains for battle and endures the hardships and dangers of peasant life. When chance brings Maxwell, a young man from the nearby village, into her life, Rose finds in him an ally and a friend. As her sixteenth birthday approaches, the time has come for Rose to reclaim her birthright, and in a court controlled by a vengeful new ruler, she must play a deadly game of politics in order to seize the throne that is rightfully hers.

I really love the cover of this book and I have to say that this publisher is crushing it with novel covers overall.  They are so unique and connected to the story, just like this one is.  I'm a fan.

The Crown of Rosemund is a mixed bag for me.  I guess I was expecting something a bit more than I received.  The first half of the story is slow.  So slow and so repetitive.  It was a struggle sometimes to stay connected.  I didn't ever feel an emotional connection to any of the characters so the plot really had to be the primary motivator for me to read.  The second half of the story got better and picked up in pace a bit.

I really liked the transformation of Rosemund from insecure, sheltered princess to a strong, resilient young woman, ready to fight to be queen.  The last bit of the book was my favorite because it was where Rosemund really steps into her role as leader and queen.  She bands people together and takes her castle and her position back.  There are some good fighting scenes and it felt climactic for sure.

I'm not really sure of the target audience for this book.  After reading, I would say the younger set because of the age of Rosemund (about 16) and how the story progresses.  The romance isn't really a romance, just a friendship for most of the book.  Everything stays pretty surface and as an adult, I was really hoping for more.  So, maybe this book would be better suited for the younger YA crowd?  That would make more sense.

Content:  peril, some violence and fighting.  One chaste kiss at the end.

Posted by Getting Your Read On at 9:33 AM

Labels: Medieval, Michele Ashman Bell, The Crown of Rosemund, YA