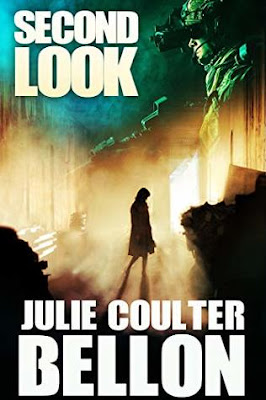 When the most wanted terrorist in the world escapes from a high security prison, Nate Hughes is part of the task force sent to recapture him. During the mission, he meets Abby, a fellow investigator that seems to have it all together. He's drawn to her and hopes they can join forces, but when her past is revealed, loyalties are called into question. Could she have turned against the country she once held dear?

The CIA wants her captured and interrogated, but with a terrorist attack imminent, Abby may be the only person in a position to help them stop it. Nate must make a choice to either trust her or turn her in---but the wrong decision would clear the path for the largest attack on freedom the world has ever seen.

And time is running out.

Author Julie Coulter Bellon is one of my very favorite authors in the romantic suspense genre.  I love this Griffin Force series and I'm always so excited when a new one comes out.
Each book in this series can stand alone but you might have more fun if you read this series in order because there is some continuation of secondary characters.

Abby is one smart lady.  Honestly, I know there are people out in the world right now doing exactly what Abby did in this book and it honestly just boggles my mind.  Smart, brave, dedicated people, willing to give all for the fight of freedom and justice.  It makes me feel so lame and weak, but so grateful too.  Anyway, back to Abby.  Smarty pants Abby.  And Nate, who believes in her from the moment he meets her.  I love how Nate trusts his gut and those feeling inside him and how his whole team supports him.  It's awesome.

This story had me so invested from beginning to end.  I loved the fantastic forward momentum that hardly left me any time to breathe.  I had moments of full anxiety and then moments of sweet love.  It was exactly what I was hoping for.

- I picked this book up on Kindle Unlimited

Posted by Getting Your Read On at 1:57 PM