The Viscount of Maisons-Laffitte by Jennie Goutet 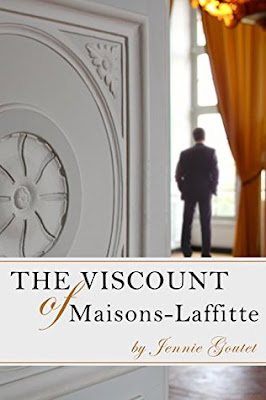 Single moms are not supposed to fall for rich French aristocrats!
There's just no way he will ever choose her.

Is there such a thing as Prince Charming? Chastity didn't take a teaching job in France to find hers, but a woman can dream, n'est-ce pas? If the father of one of her students--the Viscount Charles Jean Anne Monorie de Brase--is the best local example of princes, Charming or Otherwise, Chastity is ready to put aside any thought of falling in love again.

She's had enough of his arrogance and would prefer him to keep his distance, yet it seems there is no avoiding each other. With the ongoing pressure of a repentant ex-boyfriend, a nefarious drug dealer, and an art heist that spans the decades, Chastity and the viscount are thrown together by circumstances she would soon rather forget.

As the intimacy between Charles and Chastity deepens, they must decide if their love is enough to bridge the gap between their disparate worlds, and if happily ever after can exist outside of fairy tales.

I had a hard time settling in with this book.  There were a lot of characters and the perspective and voice was always changing, sometimes without me knowing who exactly it was.  I think this was supposed to add an air of mystery but to me it was distracting.  I got used to the writing style as I went on but it sure wasn't my favorite.  Because there were so many characters and the voice was constantly switching, I think I had a harder time connecting emotionally.

The setting in France was fun.  I enjoyed the brief glances at French life (the market, the cafe) and wish there had been more of those.

The overall storyline was good.  There was a building mystery with plenty of characters with nefarious plans.  They all sort of converge in the end along with the romance.  It makes a compelling ending!

Overall, this wasn't my favorite book but it had some good moments.  3/5 stars.

Content:  Drug use and drug dealing, mild violence but nothing graphic, clean romance

- I received a copy of this book for free.  All opinions expressed are my own.
Posted by Getting Your Read On at 4:00 AM