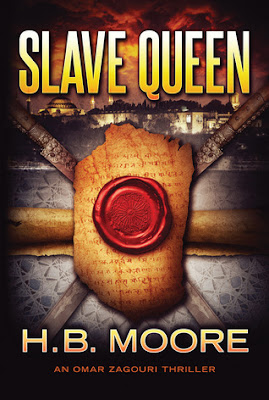 Special Agent Omar Zagouri’s latest case is his most dangerous—and his most personal yet. The discovery of secret sixteenth-century letters unveils a plot between the sultan Suleyman and his chief wife, Roxelane, to change the course of the Ottoman Empire. A descendent of Roxelane, Zagouri learns he has an enemy whose revenge has been centuries in the making.

Targeted by an antiquities collector who’s also descended from a chief rival for the ancient throne, Zagouri soon uncovers a modern-day conspiracy that threatens the lives of his family and the security of a nation.

To expose the plot, Zagouri must team up with Naim, the son of his nemesis, who heads an international black-market operation that may have ties to the killings. From ancient Constantinople to the present-day Middle East, Zagouri is on a collision course with history. Time is running out to solve a royal mystery and stop a ruthless killer—one who has Zagouri’s name on his hit list.

This is a series I really love for so many reasons.  I am always excited to see another addition to this series and I feel like such a lucky girl to be able to read and review them!  H.B. Moore is right at home with this genre.  It is where she shines for me as an author.

So, this is the third book in this series.  You do not have to read the previous books to understand this book as each book has it's own specific story.  I would recommend starting at the beginning though.  It's such a fun ride and each book is so good.

Now for my many reasons for love.  :)

I love how this book jumps from present day to way back in history.  As Omar tries to unravel a conspiracy in present-day Middle East that involves a group of people trying to overthrow the government and re-establish their place as royalty, we also get the story of the Sultan and his wife that started the whole thing.  It's fantastic.  On one hand we have guns and chases, deadly plots and ruthless people.  On the other hand we have the rise of Roxelane from slave girl to Queen to the Sultan.  The plots are just as deadly, the people just as ruthless, but this side of the story gives us a peek into how it all came about.

H.B. Moore really knows how to write a story rich with history, culture and thrills.  As a reader, I feel like I'm stepping into the thick of things right away.  I have to admit that my favorite bits are when we are way back into history.  The rise of Queen Roxelane is a story I could read all on it's own and be perfectly happy.

If you haven't ever read a book in this series, I would surely recommend that you give it a try.  This series is one of my favorites.

Content:  A few instances of mild swearing.  Slavery. Concubines as part of a harem, and multiple wives.  There are references to sexual instances, but nothing described in any detail.  There is some violence.