Swept to Sea by Heather Manning 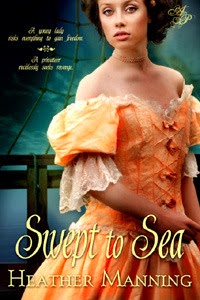 Lady Eden Trenton never wanted to leave her privileged existence in London—until her father invites a dangerous suitor into her life. Left with few options, Eden devises the best reprieve she can: escape. Chasing freedom, she stows away aboard a pirate ship, praying she will gain her independence in the colonies before she is discovered by the nefarious crew.

Captain Caspian Archer has spent the last five years hardening his heart and searching to exact revenge for the event that tore his life to shreds. When he catches word that his enemy is residing in Jamaica, Caspian steers his ship toward the colonies in all haste. His plans soon change, however, when he discovers the young beauty hiding in his ship’s hold.

Cut from the only lives they have known, Caspian and Eden are pulled together as each pursues a fresh hope upon the sea.

Swept to Sea is an Inspirational Historical Fiction book set on the open seas.  Eden is desperate to escape and unwanted marriage to a hideous, mean man who is abusive and controlling.  She hides aboard a ship captained by Caspian and is, of course, found out.

Eden is a bit wary of men, understandably.  She has been hurt and betrayed by those she trusted.  Caspian seems a bit rough around the edges at first, dealing with his own past and regrets, but is very attracted to Eden.  His gentleness and kindness urge Eden to trust him even though she is scared and hurt.

I'm not sure Caspian was a totally believable character at all times, but as a romantic at heart, I did surely enjoy his careful ministrations to Eden to win her trust and love.  He was very gentle with her.  It was almost like his personality did a complete turn around from how he treated his crew and even his son, to how he treated Eden.  That was my biggest struggle with the book.  Caspian just wasn't consistent in personality or there wasn't enough cross over from his pirate captain side to his softer side with Eden.  You won't believe the sugary sweet words that flow constantly from the pirate's mouth when he is talking to Eden.

The ending made for a swash-buckling good, pirate captain, swinging in with a sword, rescuing the damsel in distress, happily ever after.  That might be even better than a knight in shining armor!  I loved it.  The book was fluffy and diverting and full of all things romantic.

This is a clean romance.

You can purchase Swept to Sea at Amazon. 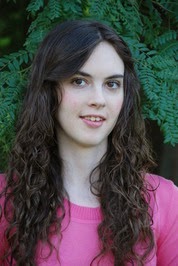 Heather Manning is a young lady who loves to read—and write. She has won multiple competitions for her writing with “Nextgen Writers” and placed first in some writing contests with the “Go Teen Writers” blog and is a proud member of ACFW. She lives in Missouri where she attends high school, acts in community theatre, eats donuts and reads every Inspirational Historical Romance she can get her hands on.
Posted by Getting Your Read On at 4:00 AM