The Unbounded Series: The Change and The Cure by Teyla Branton 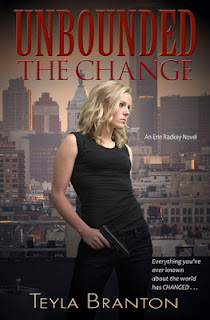 There are only two ways to kill Unbounded, and fire isn’t one of them—as law school dropout Erin Radkey learns the hard way. By fluke of a recessive gene, she has become Unbounded, a nearly immortal being with paranormal abilities.

Erin’s Change separates her from her loved ones and alters everything she believes to be true. A week earlier she was considering a marriage proposal; now she contemplates the best way to stay alive. Caught in a battle between two Unbounded groups, she is also hunted by a secret mortal society sworn to eradicate the Unbounded gene. Worse, a new identification software could mean death for all Unbounded—or enslavement for the entire mortal world.

As Erin plunges into this dangerous new life, she must carve out her own place in the madness, protect her mortal family, and decide which group she should join. Her powerful attraction to Ritter Langton, whose family was massacred by opposing Unbounded two hundred and forty years ago, complicates her choices. There are no second chances. Death, life, or love—Unbounded always play for keeps.

Non-stop action, terrifying consequences, and powerful romance make this an exciting addition to the world of urban fantasy. 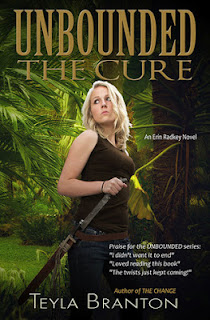 Erin Radkey remembers all too well what life was like as a mortal—and it’s not something she wants to repeat, though there were a lot fewer people trying to kill her before her Change made her one of the Unbounded.

Over the centuries the long-lived Unbounded have divided into two groups, the Emporium who craves money and power and will do anything to achieve its ends, including experimenting on its own people, and the Renegades who protect unsuspecting humanity.

Now the Renegades are close to discovering a cure that will save many lives, and the mortal husband of Erin’s closest friend is first in line. But cures cut into Emporium profits, and their agents will stop at nothing to destroy the research and assassinate anyone who gets in their way.

Erin’s new abilities are tested as she and fellow Renegades fight against the Emporium in a struggle that soon becomes all too personal and where lines of loyalty are blurred by relationships of the past. Everything is at risk, including the lives of her friends—and the love of Ritter Langton, the Renegade Unbounded who both infuriates and excites her.

From the busy streets of Portland to the jungles of Mexico, The Cure is a page-turning urban fantasy that will keep you guessing until the end.

Okay, so here is a new book series that I picked up this last week.  The first book, The Change was free on Amazon a few weeks ago so I picked that up then but I didn't get to read it until this last week.  Needless to say when I finished it, I was right back over at Amazon looking for the next book.  Lucky me, the second book was out too.  :)  I love instant gratification.  It should never be underrated.  :)

The first book, The Change, started out a bit slowly for me.  It took awhile for me to become invested and "all in" but it did happen.  The pace picked up and honestly it hardly ever let up.  As I got to know the characters, I grew to like them.  Well, or not like them, depending on who the character was.  The first book had good character development and setting descriptions so I could easily picture the book playing out in my head.

Like I said, I was glad to be able to read right into the next book in this series.  Not having to wait was awesome.

There is good tension between Erin and Ritter but I didn't feel like it ever progressed farther than attraction.  I didn't see the "love" developing based on the interactions they had.  Hope for love maybe.  The attraction and tension were palpable and real though as they were in the first book.

In the first book there is, I think, one instance of mild swearing.  What bugged me was the progression of that in the next book where I encountered the B word within the first few pages.  I felt like it was unnecessary and out of character with the rest of the writing.  Aside from those couple of instances there was nothing more.

As far as writing goes, I enjoyed these books a lot.  I would say that this author has greatly improved her writing here from the other books she has written.  She is using a pen name for this series so I know her from other books written primarily in the LDS fiction genre.  These books are so much better than those and aside from my gripe about the two random swear words, I loved reading these books.

I would describe these books as fast paced and engaging.  I was caught up in the world of the Unbounded and I really liked it there.  I'm looking forward to the next book and will definitely be picking it up.

You can find The Change and The Cure at Amazon.  (titles are linked)

Posted by Getting Your Read On at 7:36 AM