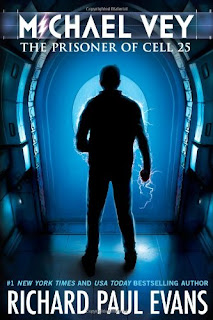 From Goodreads: My name is Michael Vey, and the story I’m about to tell you is strange. Very strange. It’s my story. To everyone at Meridian High School, Michael Vey is an ordinary fourteen-year-old. In fact, the only thing that seems to set him apart is the fact that he has Tourette’s syndrome. But Michael is anything but ordinary. Michael has special powers. Electric powers.

Michael thinks he's unique until he discovers that a cheerleader named Taylor also has special powers. With the help of Michael’s friend, Ostin, the three of them set out to discover how Michael and Taylor ended up this way, but their investigation brings them to the attention of a powerful group who wants to control the electric children – and through them the world. Michael will have to rely on his wits, powers, and friends if he’s to survive.
This is a new thing, right?  For any of you Richard Paul Evans fans, this book isn't exactly his normal.  It would appear he is breaking out of his emotional, tear jerking, love filled stories to try his hand at YA paranormal-ish fiction.  This intrigued me.  I had to read this because I wondered if he could pull it off.  I have read almost all (I still have one in the stack waiting for me) of Richard Paul Evan's books.  He has a lot to live up to.
Was this in typical RPE fashion?  Not really.  But, for a YA market I think that was on purpose.  Do I think he pulled it off?  Yes.  I do.
The book had a slow start for me but it picked up quickly and by the middle I was really into it.  The story came together well and I enjoyed the character development.  There was humor and a whole lot of shocking.  :)
At one point the book says that 9th grade is the armpit of life.  That kinda made me snicker.  I would say 8th grade was that for me, but close enough.
I like how RPE pulled Tourette's Syndrome into Michael's character.  It was believable and not over the top but at the same time make Michael seem more human and endearing.
Overall, a good read.  No swearing or sexual scenes that as a mother I would be hesitant to let my kids read.  I call it "clean".  I'll be looking forward to the next book in the series, Rise of the Elgen.
Posted by Getting Your Read On at 7:38 AM