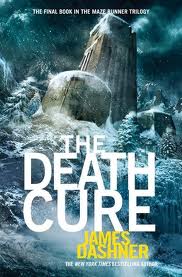 Thomas knows that Wicked can't be trusted, but they say the time for lies is over, that they've collected all they can from the Trials and now must rely on the Gladers, with full memories restored, to help them with their ultimate mission. It's up to the Gladers to complete the blueprint for the cure to the Flare with a final voluntary test.

What Wicked doesn't know is that something's happened that no Trial or Variable could have foreseen. Thomas has remembered far more than they think. And he knows that he can't believe a word of what Wicked says.

The time for lies is over. But the truth is more dangerous than Thomas could ever imagine.
Will anyone survive the Death Cure?
It was so nice to get to the end of this trilogy.  This is one intense, fast paced, action packed series and the wait in between books was killer.
Poor Thomas.  He's been through so much in this series.  I really hope he can find a good therapist because I have no idea how anyone can survive what he did without one.  But, Thomas is loyal and brave and has a smart head on those shoulders of his.  All very admirable traits.  He is an awesome lead man. 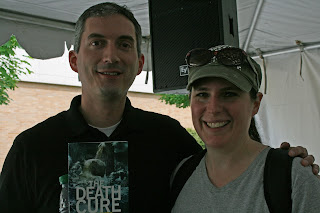 I also have to say that James Dashner is one funny dude.  I've heard him speak a few times and have always enjoyed it.  Here I am with him at a book festival.  He would not give up that pamphlet of his book.  Believe me.  I did try.  We are also the same age.  I know, right?  Old.  <sigh>  Wait, did I just call myself old?  lol.  I'm looking forward to the future writings of Dashner.  He has some freaky stuff going on in that head of his.
Okay, well that wasn't much of a review, but I don't have much time.  I have a very sick kid with strep.  No fun.
FYI:  This book contains mild language and some graphic violence.  Just so you know.  :)

Posted by Getting Your Read On at 4:38 PM