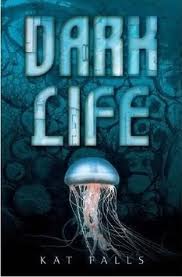 Synopsis
Ty has spent his whole life living underwater.  His parents own land and farm there as part of the government’s new Subsea Homestead Act.  Global warming has forced people above ground to move closer together as land disappears into the depths of the ocean.  And a select few have determined to make a new life underwater.  Living deep under sea is the only way of life Ty knows and when outlaws attack his homestead he is determined to fight back to protect his home, his family and his future.
Gemma has spent her life crammed together in the same living space as many other people.  Her one and only goal is to escaped and find her brother who she hasn’t seen in years.  Her search takes her deep under the ocean to a world she has only heard stories about.  It is much more beautiful and terrifying then she ever imagined.
I first saw this book in my daughter’s book order from school.  I thought it looked good so I decided to pick it up.  Then I read a really positive review for it and I bumped it up on my to-read pile.
This dystopian JF adventure was very interesting.  I really enjoyed imagining an underwater world where people can be self-sufficient.  There is much talk about Global Warming and other atmospheric and weather changes on our planet.  This book made me really think about what it would be like if something like that did happen.  Could the whole east coast just fall into the ocean?  Could the ocean really rise enough to cover our country?  Hum...  I wonder if I would be brave enough to be the pioneer into the ocean to try to make a new life there.  I seriously doubt it.  Even if I could swim with dolphins and hang out with whales.  It's all those other scary things out there...yikers!
I really liked Ty's character.  I really liked his family too.  It seemed like they were a real family, dealing the best they knew how.  Ty has some special abilities that make him different from other people.  He tries to hide that because he's afraid of what people will think and how people will treat him if they know.  While most of us don't have sonar abilities like Ty, I think many times we struggle against being "different", afraid of what people might think or say about us.  I think this is what helped me really relate to Ty and feel with him.
Gemma was  one determined girl.  Her bravery and strength came from her deep desire to find her brother.  She remembered the love he showed to her and wanted that again.  I like Gemma's loyalty.  She was a great character too.
This book had lots of fun adventure and moved along quickly.  I really enjoyed it and I am anxious to pick up the next book in the series called Rip Tide that comes out in August.


This is a JF book, suggested reading level of grades 6-10, which I thought was spot on.  There was one use of "like hell" in it.
Posted by Getting Your Read On at 7:26 AM