Review: Too Rich For a Bride by Mona Hodgson 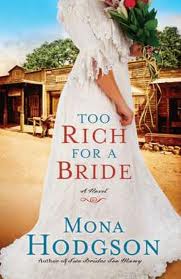 Too Rich For a Bride
The Sinclair Sisters of Cripple Creek- Book 2
By Mona Hodgson
Ida Sinclair has big dreams of making it big in business.  After finishing school, she heads from her home in Maine to the small western town of Cripple Creek, Colorado to join her sisters and hopefully gain employment from the infamous and successful Mollie O’Bryan.  The business world is still considered a man’s world and Ida finds plenty of hostility and disrespect in her pursuits.  Yet Ida is determined and focused until she meets Tucker Raines who puts an unexpected kink in her well laid plans.
This is an easy, quick read.  I wasn’t particularly drawn to Ida though I can appreciate her determination to be a successful and educated business woman in a time when such things were uncommon.  Tucker Raines was the character that kept this story moving.  It was his struggles that I connected and felt more with.  His loyalty to family and friends and his determination to help his father even when his father hurt and reviled him, made him heroic to me.
While this was a nice read, it won't rank among my favorites.
This is a Christian historical fiction book which I received from Blogging for Books.  It is free from  language and sexual content.
Posted by Getting Your Read On at 7:54 AM