Review: The Breadwinner by Deborah Ellis 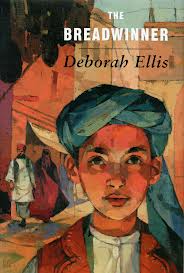 The Breadwinner brings to life an issue that has recently exploded in the international media — the reality of life under the Taliban. Young Parvana lives with her family in one room of a bombed-out apartment building in Kabul, Afghanistan. Because he has a foreign education, her father is arrested by the Taliban, the religious group that controls the country. Since women cannot appear in public unless covered head to toe, or go to school, or work outside the home, the family becomes increasingly desperate until Parvana conceives a plan. She cuts her hair and disguises herself as a boy to earn money for her family. Parvana’s determination to survive is the force that drives this novel set against the backdrop of an intolerable situation brought about by war and religious fanaticism. Deborah Ellis spent several months talking with women and girls in Afghan refugee camps in Pakistan and Russia. This suspenseful, timely novel is the result of those encounters. Royalties from the sale of The Breadwinner will go toward educating Afghan girls in Pakistani refugee camps. “...a potent portrait of life in contemporary Afghanistan, showing that powerful heroines can survive even in the most oppressive ... conditions.”

The story of Parvana and the plight of the people in Afghanisan is heart rending. Although this book is set during the horrors of war, I was touched by the courage and determination of Parvana, her family and the people around them. I thought this was an insightful introduction to the war with the Taliban in Afghanistan. It's sometimes hard for me to imagine the life women are forced to live in countries such as this.  Such oppression and control.  It makes me so grateful for what I have and what I can do.  (like writing this blog and expressing my opinions and feelings)

The book is written with young readers in mind (ages 10 and up) but does have some violence and war situations that may warrant discussion with an adult. As is usually the case after reading books such as this, I walked away with a profound gratitude for my country, my freedoms and those people who work and sacrifice to ensure those freedoms.
Posted by Getting Your Read On at 9:57 AM