Surviving Hitler: The Unlikely True Story of an SS Soldier and a Jewish Woman by O. Hakan Palm 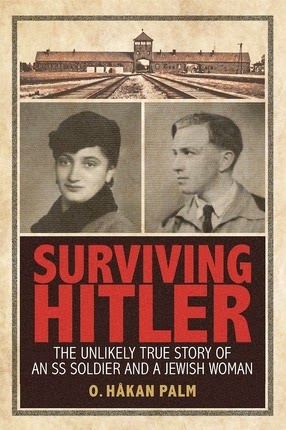 Gustav Palm kept his secret for more than forty years. He’d been a young man when Hitler invaded his native Norway. After being forced to guard a Nazi prison camp, however, Gustav took his only option for escape: he volunteered for the Waffen-SS to fight at the front.

Told in their own words, Surviving Hitler is the story of two indomitable spirits who built on their life-altering experiences to overcome the past, help each other heal, and embrace a common faith in God that led them to The Church of Jesus Christ of Latter-day Saints.

What an amazing account of two people enduring and surviving one of the most heinous times in history.  I am always drawn to books like this.  They do more than tell a story- they remind me to be grateful, they educate me and they inspire me to be better.

Gustav and Agnes lived through two different sides of WWII.  Both innocents in a tragic and awful time, forced into things that are unbelievable to some degree.  It's hard to wrap my mind around the atrocities that they both lived through.  So, so awful.  So much heartache and loss.  Their stories will touch your heart.  They surely touched mine.

Most of the book is told from the alternating views of Gustav and Agnes.  We follow each through life before, during and after the war.  Obviously, most of the book is set during the war.  The last chapter or so of the book does talk about their conversion to The Church of Jesus Christ of Latter- Day Saints, but it isn't preachy or anything.  It simply tells how they came to know of the church and what they did after joining.

I really liked the pictures and the historical notes throughout the book.  Pictures always make stories like this more personal.

I feel like this book is such a treasure.  What an amazing account of life- of sacrificing and enduring and living to tell about it.  Perhaps what is most amazing to me is how these two individuals conducted themselves during and after these atrocities.  They were never bitter or angry.  They never held on to the unfair, brutal lot that was heaped upon them.  Instead they conducted themselves with honor and integrity.  They helped others when they could.  They kept their wits about them and they continued on.  What an amazing legacy to leave their family.  I'm so grateful to the author for sharing this amazing account with me.

You can find Surviving Hitler at Amazon and Deseret Book.
Posted by Getting Your Read On at 7:07 AM