In Times of Rain and War by Camron Wright 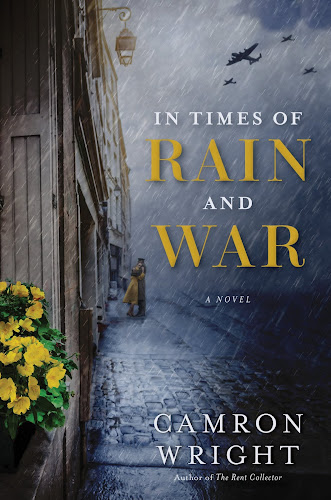 During World War II, an American soldier encounters a German woman living a secret life in bomb-blighted London.In September of 1940, the Blitz had begun. Like other British civilians, Audrey Stocking is determined to survive, except she isn’t from England. She is a German—a young Jewish woman with a fake passport and a nearly-perfect British accent, trying her best to blend into the city. Her days are kept busy working for the Woman’s Voluntary Services to evacuate British children into the countryside, saving them from nightly bombings over London. But she also writes secret letters addressed to her father’s factory back home. Audrey longs to be reunited with her father and younger brothers in Germany, but she isn’t holding out much hope. If the bombs don’t get her, British Military Intelligence will. And then there’s the paralyzing nightmares and flashbacks—something from her past she can’t quite remember. When an air raid leaves an unexploded bomb wedged in the floor of Audrey’s flat, an American soldier training with Bomb Disposal Company 5 is a welcome sight.

Lieutenant Wesley Bowers arrived in England the day the Blitz began. He knows the average life expectancy of soldiers disarming bombs is ten weeks, and not all of the men in his unit will survive. Wes struggles with the idea of losing men who are starting to feel like family. Although he’s committed to being a soldier, he grapples with the thought of death. Meeting Audrey, an attractive, intelligent, and caring British girl has been the one bright spot during the war’s unending bleakness. Wes has a girl waiting for him back home, but he’s never met anyone like Audrey. There’s an immediate connection between them, and they open up to each other, sharing their innermost feelings. Will he still feel the same if he discovers the truth about her identity? Even Audrey doesn’t know the whole truth. Not yet.

In Times of Rain and War is a gripping and heartbreakingly beautiful story about the strength and resilience of the human heart and spirit, reminding us there is always hope in hard times.
* Amazon * Goodreads * Deseret Book *
Historical fiction is one of my favorite genres and I really love books set during WWII.  My grandparents lived through this war in England and in fact, had a bombing the night before their wedding.  My grandma ran down the stairs of their house, worried about her cake that they had saved sugar rations for, crying "my cake, my cake!"  She didn't even know if my grandpa would make it to the wedding.  The bombings made it difficult to get to the church from where he was stationed because the roads were demolished.  He hitchhiked, and finally made it.  Late, but grandma didn't give up.  Thank goodness.  See why I love books like this?  It feels like I know a bit of my own history better.
I haven't ever read anything about the many men who defused the many bombs during WWII that fell but didn't explode.  Crazy stuff.  Absolutely crazy.  But how important they were to saving so many people.  It was amazing to read about and I learned so much.  I love when a book does that for me.
This book was heartbreaking.  War is so devastating.  I wish all people, everywhere could avoid it.  There were many moments of hope and love and friendship, but this story was a bit heartbreaking overall.  I'm grateful though, for the reminder of all I have to be grateful for and all those that deserve to be remembered for giving up so much, sometimes everything, for others.  Here is my favorite quote:
" The soul is a tender and complicated thing, and it can bruise easily, but I've learned it's after fighting through our deepest moments of distress that our greatest strength are found."
Content:  war violence, death, peril.  One kiss.  A couple instances of mild swearing.
- I received a complimentary copy of this book.  All opinions expressed are my own.
Posted by Getting Your Read On at 8:22 PM