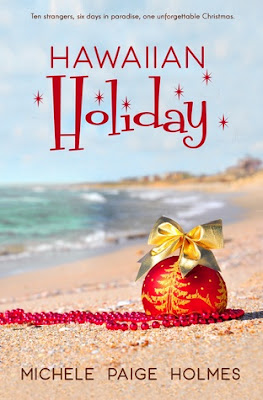 Ten strangers. Six days in paradise. One unforgettable Christmas.Hailey Walsh has always loved Christmas, and this year the holiday was supposed to be the most magical of all, spent with her large family and her fiancé in preparation for their wedding just two days after. Then Gage broke their engagement.

Now, instead of playing in the snow with her nieces and nephews, Hailey’s building a playground with children she’s never met before, spending her Christmas with strangers in Hawaii, on a service program she hopes will lift her spirits and help her begin to pick up the broken pieces of her life and heart.

Gage Stevens didn’t want to spend Christmas in Hawaii any more than he wanted to break his engagement, but sometimes fate has a way of slamming a guy against a wall and forcing him to tough decisions— for the good of others, be that his ex-fiancée or his mom. And while he’s certain that no ocean breeze or tropical wonderland can heal what’s wrong, one glimpse at a familiar head of red hair and Gage realizes fate may not be done with him yet.

I think the title alone was the thing that attracted me to this book.  I wish I were having a Hawaiian holiday right now!!  Second to the title is the author, who writes books that I love so picking up this book was really a no brainer for me.

I wasn't expecting this story though.  While the romance side of things was there, it was in the background for most of the story.  Instead, the focus seemed to be on this group of people coming together for the Christmas holiday to find support and some degree of healing through serving others.  It's a grand theme, honestly, and compliments the feelings of generosity and kindness that this time of year brings out in people.

Call it fate or whatever you want, but Gage and Hailey find themselves together in paradise without knowing the other would be there.  After a brutal break up that Hailey still doesn't understand, both Gage and Hailey are both struggling.  I can't help but admire Hailey's tenacity to root out the real reason Gage dumped her.  Gage is really an idiot, but fortunately for him, "fate" gives him a chance to redeem himself.

I thought this was the perfect setting for a sweet book that reminded me how important it is to take care of other people.