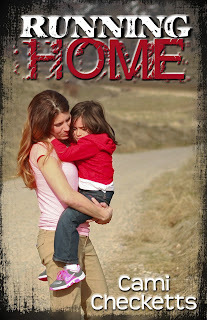 
Wow, here is another fantastic novella by Cami Checketts in the Running series.  This novella is the third installment.  Dead Running is the first book (full length) followed by Dying to Run which is another novella.

What I love about all three of these books is the suspense combined with romance and funny stuff to lighten the mood sometimes.  It's a perfect balance.

In Running Home, you have the ever present sizzle between Cassidy and Jesse right in the middle of action, action, action and suspense.  It just never lets up.  I swear it was over before I even realized I was reading.  I wasn't ready for it to be over.  But I loved every minute that I had.

If you haven't read the Running series yet, you really should.  It's good clean reading.  Start with Dead Running though or you won't understand the next two books!

Running from the mercenaries who killed her parents.
Running from a scheming redhead intent on making her life miserable.
Running from painful memories that sabotage her dreams of happiness.
With two very tempting men competing for her attention, she hopes she'll finally have someone to run to, but can she trust either of them? When secrets from her past threaten her family, Cassidy decides to stop running and fight for her future.